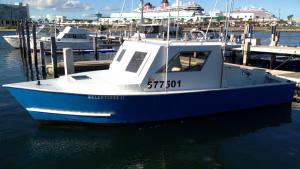 Not really sure what to say about November… Some people have been calling it Mo-vember and letting their scruff grow for men’s health awareness. If you’re an avid offshore fisherman, you might want to call it Blow-vember, mainly because the wind blew so hard and often, there were very few fishable days. If I had to guess, The National Marine Fisheries Service has probably colluded with The National Oceanic Atmospheric Administration to engineer the weather conditions so we couldn’t fish. It sounds a bit conspiracy theoryish, but that’s my two cents. Whatever the case, I’m ready to shave this beard and get back to fishing!!

As I mentioned earlier, there were very few fishable days last month. So, I am going to have to use antiquated information and conjecture, kinda like the NMFS and SAFMC when they do fish stock assessments and setting of quotas. All seriousness aside, the ocean was a wreck for a majority of the month. From the few first and second-hand reports that made it to my ear, the fishing actually sounded pretty good despite the conditions. Considering than I am writing this report on Monday before Thanksgiving and the forecast is twenty-plus knot winds for the next five days, we better all say an extra special grace before the Thursday feast!

Should the weather return to a reasonable normal in December, we should look forward to some pretty darn good fishing. By the time the ocean calm down, I would expect the grouper bite to start really heating up. The fish could be in as close as the inshore reefs and wreck and should be scattered on out to the deeper areas. They will eat a variety of live and dead bait, but you may have trouble with the red snapper if you fish with dead bait or smaller live bait. In the deeper waters, there should also be a few amberjack mixed in with the grouper and snapper.

With some calmer and cleaner water inshore, the kingfish could be another fish that gets fired up this month. When the fish show up, slow trolled spinning minnows should be all that’s needed to catch a quick limit. If live bait is available, the action could be absolutely crazy. In addition the kings, there should be a few blackfin tuna, cobia, bonito and an occasional wahoo or sail.

As far as trolling goes, there were some dolphin and sailfish caught on the few fishable days last month. For December, I would look for the trolling to continue to be decent as long as the water clarity is good and the temperature doesn’t drop too much. The edge of the Gulf Stream will likely be the place to put out the spread, but any weedline or current edge/color change could do the trick too.

One thing is for sure.. After Blow-vember, I will be taking every December opportunity to get out there and catch something!! Before cabin fever sets in.. Hope you do the same!