I’m not sure if the movie makes the holiday or the holiday makes the movie, but it’s one of my favorite movies. If you’re thinking Valentines Day, you are reading the wrong column… If you were thinking Groundhog Day, you could be in the right place, or not, we’ll see. Much like the Shawshank Redemption, I can’t pass up Groundhog Day when I see it on the cable guide. I think it’s my feelings of empathy for Bill Murray’s situation that make the movie so entertaining to me. The movie and the holiday seem like the perfect way to end January and begin February.. The only difference between the movie and reality is that I see no end in sight for my personal Groundhog Day…

January was all about the kingfishing. Day in, day out, live baiting on the reefs was the daily grind. Unfortunately, my report has to revolve solely around this topic, because the charter fleet as a whole followed this protocol all month long. Anything else would be speculation using antiquated data and conjecture, kinda like the decision making process of the National Marine Fisheries Service and the South Atlantic Fisheries Management Council. 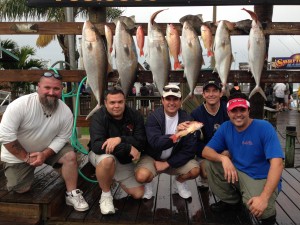 The beauty of the live bait fishing last month was the variety of fish other than kingfish that were on the reef. In addition to kingfish, there were an unusually large amount of sailfish. Some days, individual boats had multiple hookups and there were days that boats had more than half a dozen shots each. Also, there were a pretty fair amount of blackfin tuna,an occasional mahi and scattered cobia mixed in too.

The other bonus was the size of the kingfish. Last month, there were more large kings caught than I can remember. There was a large amount of fish weighed in over 50 lbs and a couple fish pushing the 60 mark. It was kind of odd though, the schools of fish seemingly got mixed up. You could hook three fish at one time and one would be 40 lbs, one would be 15lbs and another would be 5lbs. It’s common this time of year to catch kings of all sizes, but not usually in the same schools. Birds of a feather and all that..

With any luck, the start of February and a groundhog dinner will not be the end of the repetition. Hopefully the fishing on the reefs will continue through the month. The biggest concern will probably be the water temperature and clarity. If the water gets too far below 70 degrees, it could send the fish further south.

Provided the temps and clarity remain favorable, the next problem will be finding live bait. It was tough last month and will probably not get any better in February. There were some threadfins and a few pogies scattered around the bight and there were some sardines and cigar minnows on the wrecks to the north, but many days it wasn’t easy.

With the temp and bait problems solved, you could see some of the best fishing of the year. High flying kingfish bites are probably one of the best strikes you will see behind your boat. Also the shot at a tail walking sailfish is a pretty darn good bet. In addition to those visually appealing battles, you can also expect a shot at a blackfin tuna, dolphin, cobia or maybe even a big wahoo.

If you have a hankering to troll ballyhoo, you could do well. Your biggest concern may be the number of ballyhoo that get bit short by the kings.

If you wanna go bottom fishing, you may as well jus hit yourself on the big toe with a hammer… Unless you enjoy releasing a ton gag grouper and red snapper just to catch an amberjack, seabass or triggerfish you can keep.

Either way, pick a bluebird day after a front, bundle up and get out there. There’s no place hotter in Florida right now, than the reef!