So, we are officially into spring and leaving March behind. While it’s been a miserable winter for anybody above the Florida/Georgia border, it has been a relatively mild winter for those 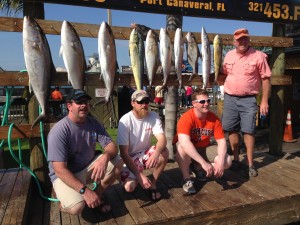 of us who reside in the Sunshine State. Although it was a mild one, I still say good riddance Old Man Winter and hello spring time. Good bye jeans and sweatshirts, hello flip flops and board shorts (or bikinis if you’re a fishin’ chick reading this). The warmer temperatures also trigger the northern migration of the blue-hairieus snowbirdicus, also known as the trafficus stoppicus maximus. That combined with the culmination of both Spring Break and Bike Week should allow things on the Beach to return to relative normal.  That being said, it’s time to do some serious offshore fishing.

All in all, for a March, last month was a pretty good one. Sometimes, the the March winds can blow all month and ruin any attempts to get offshore. Fortunately, that didn’t happen too often and there were a fair amount of fishable days.

The shining star of last month would have to be the amberjack. They were concentrated on a couple of the deep wrecks, but there were a couple good schools that wanted to bite on a regular basis. The size of the fish varied from day to day. Some days, they were smaller, just-keeper sized fish and other days, they were larger fish from 35 lbs up to over 60.

Fingers crossed, this will continue into April. The ajs typically spawn in April, so there will hopefully be a fresh influx of more fish into the existing schools. If you plan on fishing for them, make sure you bring plenty of large live baits. Generally, the larger baits will catch larger fish. They may fall prey to jigs, but just like live bait, the barracudas may be a problem. And it’s more cost effective to lose a 50 cent hook than a $25 Shimano jig!

The mahi mahi or dolphin (fish not Flipper) made a decent showing last month too. Also with the dolphin were a few sailfish and an occasional blackfin tuna. The catches weren’t anything crazy, but if you trolled for a couple hours, you probably had a few bites. 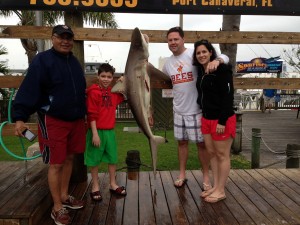 April is commonly the month we expect to see the start of the dolphin run. Hopefully, the trickling of fish we saw last month was just the tip of the iceberg and we will start seeing the numbers that make people start getting boats and gear ready to roll. Like always, the fish should be concentrated near weedlines, rips, edges, temperature breaks and flotsam. Combine one or more of the aforementioned and your odds go up exponentially. Once a suitable area is found, the standard naked ballyhoo rigged on mono and the ballyhoo/lure combos should dominate the spread. You can expect to gets bites from mahi, sails, blackfins and maybe a wahoo. You may also catch a barracuda or bonito or two.

You may want to save a bonito for the shark fishing on the beach. The bite was pretty good last month and should continue into April. A steak of bonito on the bottom could do the truck for a blacknose, finetooth, blacktip, lemon or sand tiger shark. You can find the sharks from the beach on out, usually associated with some sort of baitfish in the water.

So, catch a shark and save a tourist..
Or, catch a mahi and feed the family..
Your choice.

Either way, I’ll see ya on the pond.