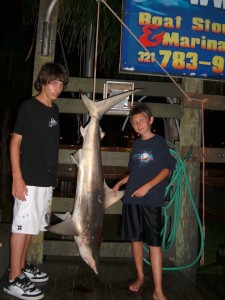 Shark: There are several species of shark that we commonly catch: black tip, black nose, nurse, Atlantic sharpnose, bonnet head, hammer head, lemon, bull, sandbar, silky. Most of these are a possibility on our shark trips, but some are more common on our offshore trips.

Shark Fishing Tips: Shark fishing is usually done by anchoring the boat close to the beaches surrounding the Kennedy Space Center. Once anchored, a few lines are baited with large chunks of fresh bonita or other oily fish. The baits are left to soak until Jaws comes by for a snack. Once the shark takes the bait and gets hooked, the fight is on! We like to fish relatively heavy tackle as sometimes large lemons, bulls, hammer heads and black tips like to make an appearance. Once the shark is brought to boat side, we will carefully try and get some pictures and release the animal. We don’t like to bring the larger sharks into the boat because it just presents too much danger for both the customers and crew. Any size shark can be dangerous, but we will occasionally keep one of the smaller sharks that are excellent eating.

Learn more about Shark on Wikipedia