Probably one of the most asked questions that I hear from the inland visitors is “Do you ever catch sharks“? Well, the answer is a resounding yes!

Sometimes, the sharks can be a nuisance while fishing for other fish. In this case, the sharks either attack the bait intended for other fish or they attack and consume the fish that’s actually being caught. Other times, we intentionally target the sharks.

Shark fishing can be some of the most exciting fishing that happens outside of Port Canaveral. When the bite is on, there’s nothing that can compare. The sharks can range to up over 300 pounds and even the smaller ones can give you a fight you won’t soon forget. Not only do they put up a fight, the smaller ones are delicious eating too.

Imagine relaxing, sitting on the back of the boat with a full one pound chunk of baitfish on the hook seventy-five feet behind the boat. You’re chilling, watching the sunset, maybe having a beverage… The waves lightly slapping the boat’s hull are the only sound. You’re sitting nearest the rod that gets bit when the silence is broken by the clicker ratcheting as the line screams from the reel. The sound reaches a crescendo emulating a school bell before you have time to slam the reel in gear.

As you lock the reel in gear, the 100# test line comes tight, the rod doubles over and the hook is set. You struggle against the pressure on the rod to remove it from the pole holder. You place the rod butt in your fighting belt and start to wonder what you’ve gotten yourself into. The shark makes a few runs to and from the boat as you struggle to keep a grip on both the reel with your hands and the deck with your feet. After ten hard fought minutes, both you and the shark are whipped and a thirty pound blacktip shark lies alongside the boat. After the shark is either released or invited over for dinner, the line is baited and readied for the next victim, both shark and angler.

The next one is going to be even bigger… Are YOU ready?

At 36′ long and 12′ wide, the Relentless II is one of the most stable fishing boats in Port Canaveral/Cape Canaveral. It has ample seating and cabin space for up to six passengers to remain comfortably in the shade and out of the weather. The 4’x6.5′ cushioned engine box has enough room for 3-4 people to stretch out after a long day of catching big fish. There is also a private head (toilet) located downstairs. 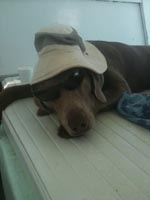 If you are a family of dog lovers like us or you just want to keep the kids occupied, don’t forget to request the special first mate, Tank. Tanker is a four year old silver lab that has grown up on the fishing boat since he was 8 weeks old. Like many people, he loves the sea life we experience daily and definitely adds a whole new entertainment experience to the deep sea charter!

Please call 321-863-2838 or use our easy reservation form to book your trip on our fishing boat that sets sail from Port Canaveral.

What to Bring on the Fishing Boat:

Make sure to bring food and drinks, sunscreen, a hat, camera and rain gear. Polarized glasses are highly recommended. Alcohol is allowed, but no hard liquor please. Ice is provided.