Well…. with the passing of Memorial Day Weekend, I guess we can officially kick off the summer season. Does that mean I can wear white or can I not wear white? Aw, to hell with it… I’ll just wear the Floridian tuxedo…white t-shirt, board shorts, visor and flip flops! It almost makes me feel sorry for the nine-to-five ham-and-eggers wearing the shirt and tie business attire. But, then again, they are probably working in air conditioning. Oh well, I’ve tried that before and I always end up back on the ocean. It reminds me of one of the four basic rules of finance “Risk, return, trade-off”. I guess that in my situation, the financial gain was never worth the trade-off.

Speaking of risk, return, trade-off, it’s getting to be time to start watching for those afternoon boomers. If you’re gonna be fishing out in the deep blue, keep a close eye on the weather or plan on getting back home in the mid-afternoon. Either way, don’t forget the foul weather gear.

The best option with the least risk for weather ruining the day will be fishing the beach. This time of year, the near shore waters like the bouy line area and waters within 5 miles of the beach can offer both excellent action and close proximity to safe areas when threatened by inclement weather. Live bait has been relatively easy to come by and is a necessity for beach fishing. Sometimes the action will be in the immediate vicinity of the bait, sometimes you may have to move a bit farther offshore to find clean water. Once the right area is found, you can expect to catch kings, cobia, jacks, tarpon, bonito, sharks and barracuda. Just slow troll the pogies on stinger rigs and get ready for some fast action. In the event live bait cannot be found, dead sardines with dusters may entice some action, but not nearly as much as the live bait. 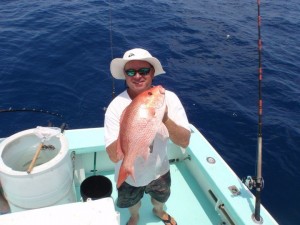 If you’re a bit of the gambler type and would like to take your chances offshore, this month, the returns could definitely outweigh the risks. By the looks of things, the spotty trolling in May should continue into June.Though a little hit or miss, there were some pretty nice dlophin caught last month. Not a ton of really big fish like years past, but some quality animals. I’m not sure why, but I have a feeling that we should see some decent trolling for at least the first part of this month. Hopefully, along with the scattered dolphin, we will see a few more wahoo and sailfish than we did in May. The standard ballyhoo and ballyhoo/lure combos should adorn the trolling spread.

As far as the bottom fishing goes, I’m not sure what to say except “HEY NOAA, LET US KEEP SOME F#$%ING RED SNAPPERS, YOU A-HOLES!” It’s sad to say that NOAA has successfully turned the American Red Snapper into a nuisance fish akin to a remora. At least some of our representatives and legislators are finally coming around and putting their foot down on Jane Lubchenko’s neck. For the first time in a while, there’s a glimmer of hope that we may be able to keep red snapper in the not so distant future. In the meantime, we’ll just have to keep weeding through the trash to catch a few grouper and amberjack.

Speaking of grouper and amberjack, the bite in May was what I would consider middle of the road with the ajs biting a bit better than the groupers. If the water would warm up a bit, the action could heat up right with it. From what I’ve seen on the bottom machine, I think there are a fair number of fish out there, but the cool water is preventing them from feeding heavily. When conditions do improve, I would expect to see some excellent action. Live bait should work well, but be sure to stock up on larger baits as the endangerd snapper will likely eat many of the smaller ones. Dead bait and vertical jigs will also take their fair share of fish too. Most of the bottom action will be from the 23 fathom ridge on out to the deeper waters.

Make sure to pack the foul weather gear and get out there and get em!