Far be it from me to say “I told you so”, but I told you so..  The cobia season was a bust!! I’m not sure who to blame, but if I had to point the finger at somebody, I’d find a way to blame the National Marine Fisheries Service and the South Atlantic Fisheries Management Council!! Unfortunately, unlike NMFS and SAFMC, I rely on facts and logic to make an educated decision. I’m not a marionette being controlled by a bunch of enviro-terrorists funded by Big Oil. The facts are this: 1. We had an extremely warm winter. 2. The water temperatures remained warm. Without the inshore waters cooling into the fifties and lower sixties, it kept the cobia from being concentrated in a relatively small area where the water was between 67 and 71 degrees. In addition, there is not any cold water north of our area to stop the fish from going north. What you end up with is a run of fish that are extremely scattered out and continually migrating through our coastal waters. And that , in a nutshell, is your recipe for a rather dismal cobia season… It’s a real shame too, because we really had some great weather! Mark my words, the aforementioned SAFMC will likely use this spring’s low cobia landings to claim they were overfished the last couple years!!

One fish’s dark cloud is also a bright, shiny day for some others. In other words, the warm water may have hurt the cobia season, but it helped the kingfish and dolphin bite in a good way. I’m not sure I can recall a March when the dolphin fishing was so reliable. The dolphin were caught by people fishing the reefs for kingfish and they were caught by people trolling the deeper waters too. They weren’t big fish, but most of them were small gaffers with a few bailers mixed in. Also, toward the very end of the month, a few nicer fish in the twenty to forty pound range started showing up. The only downfall for the trollers was the lack of weedlines, edges and trolling structure.

As long as the water conditions to hold, I would expect that the dolphin run should continue to improve in April. Should we have a few days of a slight southeast breeze, there’s always the possibility of some nice weedlines forming. If this happens, the fishing could get red hot. In addition to the phins, there should be an occasional wahoo, sailfish or blackfin tuna making an appearance. This time of year, I like to troll naked ballyhoo rigged on mono leaders to primarily target the dolphin and sails. I will fish the naked swimmers near the teasers on flat lines and outriggers. If you fish lever drag reels, you can leave the reel engaged just above freespool. When the fish grabs 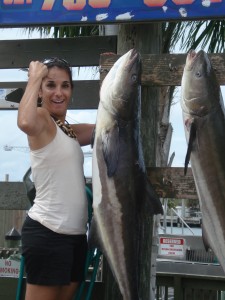 the bait, it can swimm off naturally and swallow the bait. All you have to do is let the fish run for a few seconds, then push the lever up to strike abnd reel the line tight to set the hook. This technique is deadly on the phins and sails alike. In addition, I will usually fish an islander/ballyhoo combo rigged on wire on the shotgun and/or downrigger to target the wahoo.

As I mentioned above, the warm waters also kept the kingfish hanging around last month. There were fish caught from Cris Benson all the way down to Pelican Flats. There were some giant fish caught in the northern areas like Cris Benson and the Coast Guard Bottom. The fish were averaging in the thirties and fish were caught around fifty pounds. The last couple days of the month those fish seemingly vanished, but maybe they will reappear or show up somewhere else. The fish on 8A and Pelican flats were smaller, but those areas seemed to be holding a few more dolphin and an occasional wahoo.

With the water being clean and warm, live bait should be a priority if you want to go catch the kings, especially if you want to target the bigger fish. You may need to have darn good cast net, because the pogies have been inside the port channel many mornings. Pack at least a box of sardines just in case the live bait is unavailable the day you try. Being that we may see an early spring, there could be some fairly substantial scholls of kings on any given day. If this happens, there’s a good chance that some blackfin tuna will be mixed in with the kings. Don’t be surprised to see a wahoo or cobia appear in the action. If you do see a wahoo inshore, it will likely be a big one feeding on the smalller kings.

Personally, I’m gonna try not to bottom fish until May, when the grouper open back up. But, if you are a glutton for punishment, be my guest! You may want to pack a whole ton of extra bait and may be a spare prop. If you run out of bait, the red snapper may chew the prop right off your boat.

Either way, get out and enjoy the sweet weather. If the summer is anything like the winter was, we may be in for some serious heat!!