April fools may be coming to an end, but that doesn’t mean that the National Marine Fisheries Service isn’t still making fools of us all. There have been many rumors of a red snapper season, but unfortunately, I can’t substantiate any of them. I recently spent a glorious evening at a fisheries meeting fighting to keep VMS (vessel monitoring system) off my boat and others with federal grouper/snapper permits. Can you imagine, NMFS wants to put a a tracking device on boats and wants the owners to pay nearly $1000 per year so they can know where we are fishing? Is it just me or does that sound crazy to anybody else? Any of 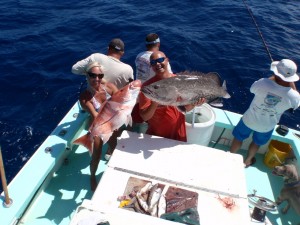 you that know me can probably guess what I told them and where they could put their VMS… Needless to say, the language is slightly too colorful to print in this fine publication… You would think they could use the funding to have surgery and remove their heads from their asses!! Then, maybe we could have a reasonable snapper season.

Wow, I don’t even remember stepping up on that soap box… That’s levitation, Holmes! But seriously, there was actually some positive things mentioned after the meeting. Both the seabass and vermillion stocks have been declared healthy and the annual catch limits have increased dramatically. It looks like vermillion snapper will remain open year round for the recreational sector. Also, the seabass quota will nearly double, so the season should stay open longer than the two months it lasted last year.

The other big news is that my favorite time of year has arrived… That’s right, it’s grouper season!! May 1 might as well be my birthday, New Years and Christmas all rolled up into one! It’s a good thing I got caught up on my sleep last month, because I definitely see some sleepless nights on the horizon. Guess I better wrap this babble up and get to catching some bait.

There’s not really a whole lot to say. You’ve read me saying it a hundred times. Live bait, the bigger the better.  Get yourself a livewell full of bait, lock the drags down and prepare for battle. The fish could be as far inshore as Pelican Flats, but the most likely areas will be from the 23 and 27 fathom ledges and the offshore wrecks and cones.

If you’re gonna be out in the blue water, you might as well be ready to do a bit of trolling too. May is also one of the best months of the year for this type of fishing. There should be plenty of dolphin with a few sailfish and an occasional wahoo thrown in the mix. Naked ballyhoo on mono rigs fished tight to the teasers should do the trick on the phins and sails. Try ballyhoo/lure combos rigged on wire fished long or deep for the wahoo.

Not to sound overly positive, but the live bait fishery can be red hot in May also. Some of the best kingfishing of the year can happen this month as the kings stage to spawn on the moon. When the fish show up, the fishing gets absolutely stupid. You could catch your limit in minutes. With the kings, there should be a few blackfin tuna and cobia. If you see the blackfins busting the surface, try pitching a live bait on a mono rig into the fish. Sometimes they shy away from the wire rigs.

Whatever you want to fish for, get out there and get some while you can!!