Did you hear it? I did…Early in July there was an audible thump that could be heard throughout the fishing community. That thump was the National Marine Fisheries Service dropping the ball, yet again. We were supposed to enjoy a red snapper season for both 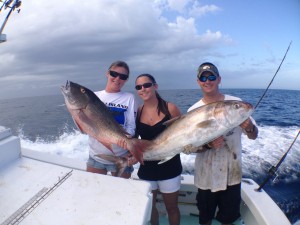 recreational and commercial fishermen starting the second weekend in July. But as we all know, that didn’t happen. The recreational season was likely to be only a three day weekend, but NMFS was unable to get their s&@t together and have the paperwork signed. The new tentative dates are supposed to be in August, but don’t hold your breath.. The NMFS is honestly more worthless than a weather man. At least the weather man pulls his head out of his ass to look around once in a while..

The only thing worse for bottom fishing than the NMFS is possibly the cold water upwelling that showed up at the end of June and stayed through July. I say ‘possibly’ because they are both an absolute nightmare and I’m not really sure which is the lesser of two evils. At least we know the cold water will eventually stop plaguing us.  Either way, we were hamstringed by the upwellings for the bulk of July, effectively shutting down the grouper fishing. The one silver lining on the cold, cloudy water was the concentrations of amberjack that showed up on a few of the inshore wrecks. Most were smaller jacks, but those are the best eating anyway. Mixed in with the jacks were plenty of red snapper, sometimes boiling the surface right behind the transom. Occasionally a few nice mangrove snapper would make an appearance, but they were tough to catch around all those pesky reds. 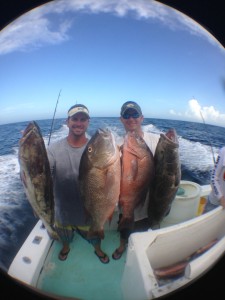 Fingers crossed, hopefully August will bring in some warmer water on the bottom. Provided the conditions improve, the bottom fishing could get decent. Normally, when the water warms up and the fish have a chance to get acclimated, they will feed heavily to make up for their near hibernation. Most of the action will be from 130′ on out to the cones with live bait accounting for most of the grouper and amberjack. The pinfish have been hard to come by, so start your bait catching earlier than normal before your trip.
The live bait fishing on the inshore reefs was also hindered by the cold water upwellings. The cold makes the bait   fish stay tight to the bottom and the pelagic fish don’t like to go down in the cold to get them. Where the pelagics go is anybody’s guess, but the charter fleet would like to know the answer should somebody find one. There were a few kings and cobia caught, but there never seemed to be any consistency to the fishing. Some days there were a decent amount of fish caught on one reef, then the next day you couldn’t get a bite any where in that area. I guess they are just on the move looking for food and that’s just my 2 cents.

Just like the bottom fishing, the live baiting should improve when the water warms up. August is usually a good month for kingfish and cobia, and the mahi fishing can be ok too. Mixed in with the others should be the usual assortment of bonito, sharks, barracuda and jack crevalle. Take plenty of bait and do a bit of live chumming to up your odds. Also, you may want to try fishing on the beach, just offshore of the bait. This time of year, there could be some big kings, tarpon, bonito, jacks and shark lurking binocular distance from bikinis.
As far as trolling goes, August is kind of the end of the doldrums of summer. If you’re an optimist, I have seen the trolling pretty darn good in August. If you’re a pessimist, the year for trolling has been fairly slow, so maybe that’s what to expect. Better to be an optimist… You’re just gonna have to get out and try.

Either way, keep your feet moving so the big ball doesn’t land on them and get out there and get some before the hurricanes show up..