Well it’s officially over. The recreational snapper season 2013 has come to an end. All in all, I’m not really sure what to say about it. I’m not sure whether I should be happy that we got to fish for three days or mad that we only had three days to fish.. The only sure thing about the season  was the fact that the whole entire weekend was a sh** show circus created by the mind trust we call the National Marine Fisheries Service. There were so many boats on the water, I think the NMFS and the environmentalists may have taken to the water in order to block fishermen from the fish. Honestly, I think I saw a bathtub with a motor on it twenty miles offshore, with three people fishing. 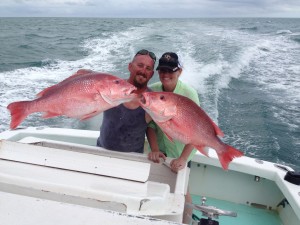 To put the icing on the cake, the next worse thing to the NMFS, the Atlantic sharpnose shark,  was out in full force. When you could get close enough to structure to drop your bait down, there were the trusty sharks to get the bait before the snapper. Between the crowds of people and hoards of sharks I had to double up on my blood pressure meds and make sure the paddles were fully charged..

Looking back on the weekend, I think for the circus that it was, things turned out all right. Those that worked through the BS, ended up catching some pretty nice snapper. I was a little surprised that there weren’t more fish over 25 pounds caught, but there were some nice catches hung on the board. Mixed in with the snapper were a few grouper, some sea bass and a couple amberjack.

As far as bottom fishing goes this month, I would expect it to remain relatively slow, like it usually is in late summer. Those willing to try hard should be able to find a few grouper and amberjack from the 27 fathom ridge on out to ‘270. Inshore, there should be a few mangrove snapper with some sea bass and trigger fish. The biggest variables anywhere will be the water clarity and the number of sharks.

The trolling this month could actually be a surprise. Sometimes in September, we have a decent amount of dolphin and sailfish. In addition, there’s a chance at a wahoo or maybe even a blackfin tuna. The key will be finding the clean water edge and the bait. The beauty of September is that you may see only a couple other boats all day!!

Better get out and get those last trips in, Old Man Winter is lurking right around the corner..