So, yes, I missed last month’s report. I was busy fishing.. Is that ok with you? Like I really care… I’m still busy fishing, so this is going to be short and sweet. 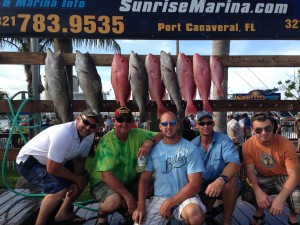 Just in case you didn’t know… The NMFS and the SAFMC have announced that there will be an 8 day red snapper season in July. It will consist of two three day weekends and a two day-er. July 11-13, 18-20 & 25-26 will be the dates for the Great Snapper Rodeo 2014. Isn’t it so generous of them to let us fish for a whole eight days? You know what I think about it.. Oh well, half-full, it is five more days than last year! The limit is also going to be a staggering one fish per person with no size limit. Again, half-full Busman, easy there lil fella…

The bottom fishing in general has been kinda hit or miss. The upside is that there have been spots where the fish have erupted. The downside is the fact that many other spots, it has been hard to get a bite. If we don’t get a shot of cold water (thermocline) this month, I would expect the fishing to remain about the same. Bait hasn’t been much of an issue and surprisingly, the pogies have been working well for the gags. Take plenty of bait, the snappers will be biting great up until 12:01 am 7/11/14.

The live bait trolling has been way off so far this summer. There have been very few kingfish. But, on the upside, there have been a fair amount of cobia. Like the bottom fishing, this trend should continue through this month. The pogies have been a bit fickle toward the end of June, but hopefully they will show back up for July. 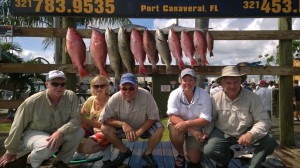 The only thing slower than the bottom and live bait fishing was the trolling. There were a few dolphin, sails and wahoo caught last month, but not hardly enough to warrant the fuel, bait and time invested. Look for much of the same in July as there should be little change from the flat line it is right now.

There has been some action on the beach with a few kings, tarpon, jacks, bonito and sharks to keep anglers busy. If they’d ever quit dumping that dredge crap down the beach, the fishing could get red hot. Unfortunately, the water just doesn’t get a chance to clean up quite enough. Still, there’s some good action to be had.

So, light some fireworks (preferably close to NMFS and/or SAFMC HQ). Then, light off the motor on your offshore machine.. Get out and get it done with some red, white and blue. At least an American Red Snapper or two!