Well, snapper season 2014 has came and went and honestly, I’m not really sure what to say about it. One thing’s for sure, the bite wasn’t exactly what everybody may have expected. I’m sure everybody thought they would just run out to their favorite honey hole and load up with 20 pounders and get home. That expectation was a pipe dream for a few reasons, most of which 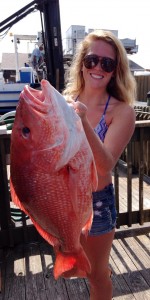 can be traced back to some a-hole named Murphy who made up some stupid laws… First and foremost, when snapper season opens up, the fish know it and they go into hiding or quit biting. Some of the spots where you couldn’t grouper fish through the snapper looked like the remnants of a nuclear reactor meltdown. You’d pull up, mark nothing but the structure and hardly loose bait. Where did they all go? Who knows. Strike one…

Secondly, the shear number of boats fishing was staggering. You think you’re headed to your secret honey, only to find there’s already ten boatloads of your new buddies fishing there. If you were lucky enough for there not to be a boat on your rock, you didn’t want to fish it for fear of one of those new buddies sniping your spot. Strike two…

Thirdly, in addition to contending with all the other boats and anglers, you had to deal with the tax man. No, not the government idiot, the man in the grey suit! I personally had half a dozen fish over twelve pounds eaten by sharks on one rock. Imagine that, another fish mismanaged by NMFS.. Those sandbar sharks need to be thinned out, but NMFS says they are overfished too. And don’t even get me started on those ridiculous jewfish!!

All in all, the catches were pretty good. I’m just sour that there were so many boats that it made the fishing a little difficult and frustrating. There were lots of limits caught and the fish were generally decent sized. There were, however, not near as many fish caught over twenty pounds as most people expected. Mixed in with the snapper were a handful of grouper, amberjack and cobia.

Now that everybody spent most of their fishing money chasing snapper, it should be smooth sailing if you want to go bottom fishing. 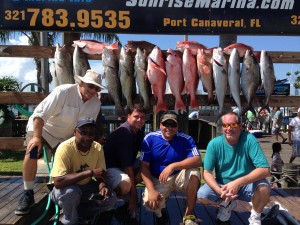 Provided the thermocline doesn’t move in, there should still be a few grouper and amberjack from 130′ on out to the cones. Take plenty of live bait as the snapper will likely will show back up since the season closed!

The live bait fishing has been very sporadic all summer with kingfish being tough to find. But, there have been some cobia around along with some bonito and sharks to add to the action. I would expect this fishing to remain relatively the same throughout August as long as the cold water stays away.

As far as the trolling goes, I only heard of one decent catch of dolphin all of las month. In fact, that was the only dolphin I heard of at all. Sometimes in August we get a little run of dolphin with a few wahoo and sails mixed in. So, if you really want to try trolling, there’s your incentive..

Either way, summertime is sliding by, so get out there and do it up before it’s too late!!