It sure seems like fall is on it’s way. The temperature isn’t chilly by any means, but at least it’s a notch or two below that stifling heat of August! This could mean a start to falling water temps, which could lead to a resurgence in the offshore fishing. It could also mean the start of an inshore bonanza too.

Probably the best bet for October is the aforementioned inshore fishing. The change in climate has caused the mullet run to start along the beach. This mass migration of baitfish along the inshore waters causes predatory species to gorge on the fall cornucopia. The angler’s number one target will likely be the snook, bu 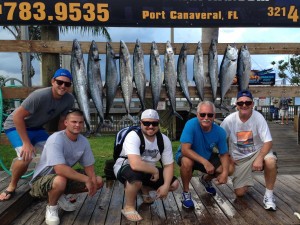 t for those anglers just wanting to pull on a bunch of different fish, there are a ton of opportunities. Besides the target linesiders, there will be redfish, sharks, jacks, tarpon, bluefish, Spanish mackerel, ladyfish and maybe a flounder or mangrove snapper around underwater structure.

Probably the number one bait should be the mullet that the fish are ambushing. They should be easy to get and all the local predators are feeding on them. Once you make bait, you’ll have to figure out how you want to rig them. Free lining the bait is the most natural approach, but it also requires constant attention due to the bait swimming all over the place. A sliding sinker rig is the other choice and it allows you time to enjoy a beverage as it doesn’t need constant tending. You will probably want to try a bit of both methods and see what works for you. You may also want to try a few live shrimp or a chunk of dead mullet. Sometimes you will be surprised what you might catch.

As far as fishing offshore goes, October is one of those months that can go either way. Typically, the start of the fall weather pattern means that we end up on the bottom side of high pressure in the Carolinas. This means a healthy dose of northeast wind which blows out many days in the month. It is, however, a rule of thumb, not something set in stone. I have had more than a few Octobers in the last couple decades where I fished more than half the month. I’ll keep my fingers crossed that it’s not going to be a typical October and we’ll all get some days offshore.

If you decide to leave the beach bonanza, be advised that it will likely be a roll of the dice. Much of the offshore fishing will be affected by the weather and sea conditions. If it gets real rough and the water gets too dirty, the odds of catching go way down. If it stays calm and the water stays clean, the odds should go up.

As far as fishing goes, there should be a little bit of everything. On the bottom, there should be a grouper here and there with a few amberjack. The live baiting should produce a few kings and cobia. The trolling should be good for a scattered dolphin and wahoo. Also, the sailfish action might show a bit of improvement with the weather change.

Hit the beach bonanza or roll the dice, your choice. Either way, make the most of it when the weather lets you!

See you on the pond!!
Thanks and tight lines!
Scott