I’m not sure what to say about November… Maybe it was like the adolescent with so much promise that wastes his time goofing off instead of excelling in sports or academics. Maybe not the perfect analogy, but hopefully you get my drift. Leaving October and drifting into November, it looked as though we could expect plenty more upcoming fishing possibilities. That is, until Mother Nature decided to stir the proverbial pot a bit.

It really is a shame to see a month with so much promise get blown out like a cheap Thanksgiving candle where all that’s left is the smell of the smoldering wick. Speaking of which, shouldn’t they make the whole candle out of whatever they use for the wick? Anyway, the bottom line is this; The fishing was awesome and l 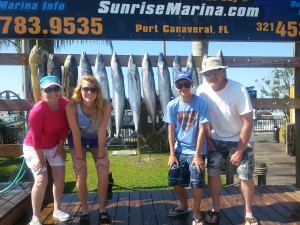 ooked to stay that way until the wind started blowing and that pretty much put an end to it.

Fear not, all hope is not lost. Once these weather systems settle down, things should go back to a more normal wintertime pattern. This pattern is typically a couple days of inclement weather, followed by a day to calm down, hopefully followed by a few days of nice weather. You have to be ready tho go, because these days have a way of seldom falling on the weekends. Assuming we start enjoying those bluebird days, the fishing should get back to being pretty good.

The few days we were able to fish last month, the live baiting was the absolute star. The kingfish bite was as good as it gets and there were all sorts of other fish in there with them. There were more blackfin tuna caught than I’ve have seen in quite a while. Also mixed in were a fair number of cobia, mahi and a few sailfish. All in all, it was some of the best fishing I’ve seen darn near all year.

Once this wind calms and the water has a chance to settle out a little, I’m hopeful we will be returning to nearly the same scene. Somewhere on the inshore reefs, there should be an aggregation of kings as they are migrating south to warmer waters. Once they arrive, they usually stick around until the water temps start dipping into the upper 60’s.  This should be all the action anyone needs as the bite can get pretty fierce. The other cast of characters such as the mahi, cobia, tuna and sails should also be in the vicinity of the action. Live bait will get tougher to find as the water cools down, so be sure and buy a box or two of minnows just in case.

The bottom fishing was pretty much non-existent last month, but that should change like the weather. There should be a good chance at catching a few grouper before the season closes on January 1. Like the kingfish, the grouper start to migrate south and inshore as the water temps start to drop. And, when they do show up, the fishing can be better than you could imagine. With the grouper, sometimes the cobia also show up, so keep a jig rod handy. As always, take plenty of live bait as the red snapper and puppy sharks can eat you alive.

The falling water temps can also mean good things for the trolling. Like the other fish, the sails migrate south in front of the cooler water. When they show up, the fishing can be a sailfish bonanza. With the sails, expect a few mahi and an occasional tuna or wahoo.

So, forget about your Christmas list and get some of the red hot wintertime fishing! Fish in the cooler is better than a fat guy in a chimney any day!