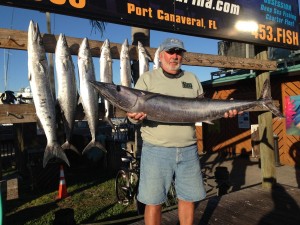 of the year, which means so many things.. Besides the holidays, the biggest thing is the end of grouper season. Love the holidays, but hate with a passion the end of grouper season. Maybe someday soon we’ll get those months back. Lord knows we as fishermen are trying! Maybe Santa will bring brains and reason the the NMFS for Christmas? Not likely!!

Either way, the kingfish have arrived in droves. They’re a little on the small side, but they’re still fun to catch. The bonus to these smaller kings is that they attract the larger wahoo. There were several wahoo caught last month in the forty pound range. Also, there were decent numbers of blackfin tuna, sailfish and dolphin.

For the first month of the new year, this will hopefully continue, as long water temps stay around the low 70’s. There should also still be a variety of other fish joining the party too. Spinning sardines should do the trick, but live bait will get you a bigger average fish. Also, the live bait will probably get much faster action and a better shot at the wahoo, tuna and sails.

If you want to try trolling, it could be pretty good too. There’s enough dolphin and sails to keep things interesting. If you start inshore by the kingfish fleet, be prepared to go through plenty of ballyhoo. Unfortunately, that’s where most of the action has been centered.

As far as bottom fishing goes, you can still keep amberjack, but they have been a little difficult to find.. I’m sure the red snapper and gag grouper will keep you busy enough to make you wanna pull your hair out. I just can’t stand releasing snapper and gags!

Either way, grab some bait and head to the reef! It’s a new year and you have to set the standards all over again!