As I sit down to write this report, I’m brimming with excitement and optimism. As should anybody that had a chance to experience the dolphin bite in the middle of April. There were a couple of days when the moon 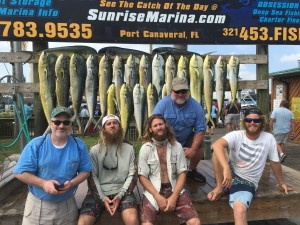 and stars aligned and heaven on earth was experienced by some lucky fisherman. I happened to miss the first day, but managed to get into the action on the second day. It was honestly a thing of beauty. There was a strip of green water with Gulf Stream blue water on the inshore and offshore side with a massive current rip on the offshore side. It was pretty much what dreams are made of if you like to troll. Not only did it look right, there were dolphin seemingly everywhere along the edge. In addition to the crazy numbers of fish, they were all quality sized fish. Average catches were in the high teens to mid twenties with some boats catching thirty or more. I can honestly say it was one of the best bites of mahi I have ever seen. The only downer was that on the third day, the edge was gone. But, there were still a few fish around in the wide open.

I’m gonna cross my fingers that the moon and stars remain aligned and this is the year our dolphin fishing makes a decided upturn. Assuming said alignment, it will just be a matter of finding the right color change, weedline, or edge. From there, some ballyhoo rigged on mono leaders should do the trick, just troll them close to your teaser. Along with the dolphin, there should be a shot at a wahoo, sailfish or blackfin tuna. The others will be fine on mono, but if you want a shot at the hoo, put a 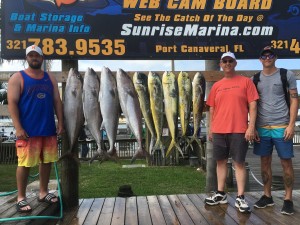 ballyhoo/lure combo rigged on wire in the spread. This bait should be fished on the shotgun or downrigger.

I have to say I’m sorry, but even as good as that mahi bite was, I’m more so looking forward to the opening of grouper on May 1. There were a few around in April, hopefully they will stick around through May. When it opens May 1, the grouper will be in as shallow 75′ on out to the cones. Take plenty of big live baits and possibly a prescription for a sedative. The patience testers will be the red snapper eating all your bait and the sandbar sharks that will eat the fish you hook. A little patience will go a long way to a grouper dinner.

The live bait fishing on the reefs was a bit spotty last month, but I would expect that to get a bit better in May. Usually in May, we get a shot at some big king mackerels as they get ready to spawn. Along with the kingfish, there could be a shot at a blackfin tuna, wahoo, sailfish or cobia. The live bait has been a bit tough lately, but with some decent weather, maybe they’ll settle down in one area.

People always ask me “What’s the best month to fish”. I always tell them “Why, May of course”! You can pretty much catch anything in May, so there are so many options.

Whatever it is you wanna go for, go for it. Just get out there and get after em. It’s not going to happen if your stuck doing honey do’s.