Spring has sprung and if you ask me, the cobia are done. Once again, the season started with a glimmer that was abruptly snuffed out. In mid February, there were some rays to be seen with a scattering of cobia. And as quickly as the season was shaping up, the water warmed up seemingly overnight. After the water warmed up, the rays and fish were gone. My 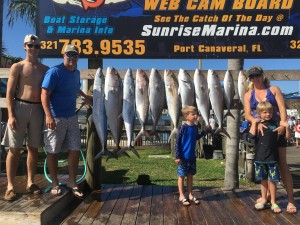 cobia season consisted of hooking one borderline keeper cobe that ended up throwing the jig hook into my nose. Via con dios you filthy animals. Next time I see you, I have a debt to settle!!

The cobia may have pulled a vanishing act last month, but a few of those critters painted like Easter eggs showed up. It’s always nice to see a few mahi show up early in the season. Hopefully, it’s not the Lucy/Charlie Brown set up like we had with the cobia.

Keep your fingers crossed, we are due for a good mahi run. It has been a few years since we’ve seen a good season. If they do show up, ballyhoo will be the go to bait. Rig the ballyhoo naked on a mono leader and run them close to your teasers for the best results on the phins and sailfish. Also try to run a couple lures 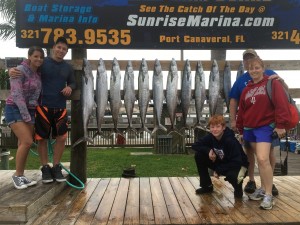 rigged with ballyhoo on the long bait and downrigger for a shot at a wahoo.

With grouper being closed until May, amberjack were the star on the bottom last month. For April, I would expect the aj’s to remain fairly consistent. The biggest problem will be finding them as they will be spawning and all grouped up in big schools. Once you find them, fishing should be awesome with big live baits.

The live baiting on the inshore reefs was fairly consistent last month with a bunch of good kingfish catches. Mixed in with the King Mackerel were a few sailfish and a scattered wahoo or sailfish. For April, I would expect the fishing to continue through the month with the kingfish, cobia, wahoo and sailfish. Live pogies will work best, but frozen minnows will work in a pinch.

One minute re month till grouper season y’all!!

Get out there and enjoy the spring weather before it gets too hot.