Much like the rest of the winter months so far, February has had more 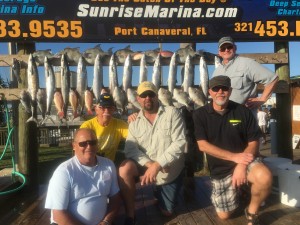 than its fair share of blown out days. As I write this, there have been very few fishable days in February. So, I don’t have a ton of info to bring to the plate.

Surprisingly, even though it was rough much of the time, the water remained pretty decent. It remained both relatively clear and warm all things considered. These favorable conditions kept the fishing pretty darn good on those few fishable days.

Although the water remained above 70 degrees, the kingfish still wanted to school up in dense knots. The problem became like a needle in a haystack to find these tightly packed groups of fish. In addition, the fish wanted to move around a bit too. However, once you found em, the fishing was pretty much pitch and catch. Mixed in and around the king Mackerel were a few sailfish, blackfin tuna and an occasional mahi mahi or wahoo.

I’m gonna hope and pray that in March, we finally get a good long stretch 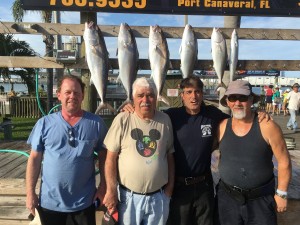 of fishable weather. If the water temp and clarity remain favorable, hopefully the kingfish will spread out a bit so they are easier to find. As long as they are still around, the other pelagics mentioned above should still be a good bet too. Also, I would expect to start seeing a few more cobia in the mix. If livies are available, they will be the best approach. But, if they’re unavailable, spinning minnows should to the trick.

Besides the warming temperatures and the first glimpses of beach bodies, most fishermen await the arrival of March for an entirely different reason. Cobia and rays are what gets everybody fired up about March. And when I say ‘rays’, I don’t mean the kind showering down on the Casper white beach bodies on the beach. I mean big ol black-backed, white-bellied manta rays. When they show up in the 67-70 degree water, they will likely be loaded with cobia. Nothing gets the heart pounding like rolling up beside a ray loaded with cobia. No matter how many times you see it, it still creates pandemonium in the cockpit every time.

If you are lucky enough to find the rays, a jig tipped with squid is generally all you need to get the cobia interested. If by chance there are some finicky ones out there, a good live bait will usually do the trick. In addition to the cobia following the rays, there could be some free swimming cobes in the same vicinity. So, keep an eye out for stuff other than rays.

If you wanna try a little bottom fishing, there should be a few amberjack and triggers around. You’ll likely have to go through a bunch of grouper and red snapper to capture something you’re allowed to keep and eat.

Either way, get out there, enjoy the warming temperatures and catch a couple brown ones for the dinner table!