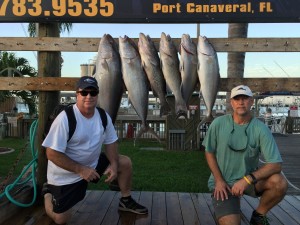 There’s not really a whole lot to say about January as I start to write this article, or at least there’s little to say about the fishing. So far, only about one in four days in January have been offshore fishable and some of those weren’t exactly calm. The problem with the few fishable days being far between, is that it’s hard to establish patterns. Therefore, much of my forecast is going to rely on past February’s patterns and not so much affected by how January ended. The one thing I can say about last month is that we saw a bit of winter weather that we haven’t seen much of over the past few years. I for one think we’ve seen enough for this winter and we can bring back the temps in the high 60’s and low 70’s. 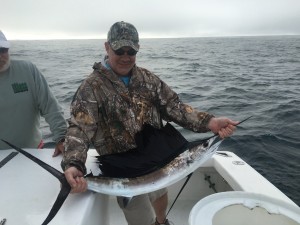 When it wasn’t too cold, windy and rough to fish, the fishing was actually pretty darn good. For a few of the days, there was a very defined edge where the water changed from pure mud to a decent blue. When that edge was there, there were multiple species of fish feeding on the blue water side. Some of the best sailfish fishing in the past several months happened along this edge with many boats reporting multiple opportunities. There were also good numbers of kingfish with an occasional wahoo, a few mahi and blackfin tuna.

If the water temperatures in February remain a few degrees above seventy, I would expect to see action similar to last month. Most of those pelagics should hang around until the water temps dip below 70 degrees. Also, the fish could move into the reefs if the water inshore ever cleans up. Last month the clean water was outside 120′ and if that clean water moves in, the kingfish action could turn red hot. Also, if the king mackerel get a chance to school back up, there should be a better chance at a few more blackfin tuna.

If the fish seem to be concentrated, spinning minnows on stinger rigs should be all you need to keep you in the action. If the fish are more scattered out, you might have to spend a little more coin and troll ballyhoo. The problem with the ballyhoo rigs is that the king mackerel love to clip them off right behind the hook.

If you really want to bottom fish, you should find plenty of action on grouper and red

snapper that you have to throw back. If you’re trying to catch something for the grill, pack an extra portion of patience as the amberjack have been a little hard to come by. If you’re lucky, you might find a few triggerfish, mangrove, mutton or yellowtail snapper on the inshore reefs like Pelican Flats.

Either way, if the ocean is calm enough and it’s not too cold, better take advantage any good days and get offshore.

At least me writing this article is like being a weatherman. I can be as wrong as wrong gets and I’ll still have a job tomorrow.