Sorry if the next few reports are short, but I’ve been fishing so many days that I haven’t had time to keep up with the computer work!!

3/8/11. Left Port Canaveral with a crew of five to go cobia fishing. Fishing was awesome! We ended up catching our limit of ten that averaged out just under thirty lbs. Released several 20 plus pounders too.

3/9/11. Had a crew of six on this day of cobia fishing. We managed to catch our limit of twelve fish and released several that were keeper size. The average fish that we kept was near 25 lbs. Almost all were caught fishing manta rays.

3/13,14/11.  Fished both days with a four man crew. We managed to catch a limit both days with a pretty decent average size. Still havn’t caught a “gift certificate fish” in the Sunrise Marina Tournament!!

3/15/11. Just myself, Jeff Thummel and Jeff Mayhew today. Fished the beach off Patrick AFB and managed to catch a few nice fish. A couple of the cobes were a bit over forty lbs.

3/16/11. Same crew of myself, Jeff and Jeff.  Fishing was red hot late in the day. There were freeswimmers and rays everywhere! We easily had our six fish limit with the average pushing 30 lbs. 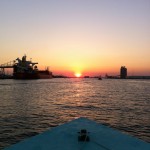 3/17/11. Fishing was a little tough for us today.. We ended up catching the six we could keep, but it was a struggle. Several of the fish were 36″ moidels with a couple of 30 to 35 pounders.

3/18/11.  Crew for the day consisted of myself, Jason Hedman, his son Joe and Joe’s buddy Logan Scrach. Trying to avoid the crowd fishing the beach, I opted to try further offshore. As luck would have it, we found a few rays and had them all to ourselves! Young eyes combined with good casting allowed us to catch a limit fairly easily. I think Joe and Logan caught most everything that day!