Well, it’s the opening of Grouper Season 2012 in the South Atlantic, which means that hard-core bottom fishermen from North Carolina to Key West will be gearing up and heading offshore to chase these tasty critters. Gag, black, scamp and red groupers make up the majority of what are considered the “inshore” groupers that have a closed season, annually from January  through April. Normally, it is at this point that I would go off on a rant about the National Marine Fisheries Service and the South Atlantic Marine Fisheries Council, but I’m going to save the soap box antics for another time and just be glad we can go fishing!

The biggest key to grouper fishing is finding the right structure. Whether it is a natural rock formation, ledge, reef, hard bottom or artificial structure, to find the grouper, you must find the structure. All grouper like to have a home where they can go and hide if there is a threat, like sharks for instance. When scared, a grouper will often swim into a hole, cave or any structure where they can hide by wedging themselves into a crevice and flare their gills so they can’t be removed. It’s kinda like us boarding up our windows and closing up shop right before the big hurricane. The beauty of these grouper holes or “homes” is that once you find a good one, you can catch fish there for years to come. You probably shouldn’t go back there every day for a month, but if it works, more power to you. Depending on my charter schedule, I try not to fish a spot more than once every other week. There are, however, exceptions. A grouper is called a grouper for a reason, they tend to group together, sometimes in fairly large numbers. If you find a good school of fish, you could potentially manage the school like a herd of cattle, just hope that you’re the only one that knows where they are! That’s just one more reason that a good grouper spot is guarded like Fort Knox.

Once you know where the fish are “hiding”, wink, wink, it’s just a matter of rolling out there and slamming a limit and coming home, right? Easy there Skippy, things aren’t that easy.. Before you get out there, you’re going to need to fill the baitwell with some choice live baits. If you ask ten different grouper fishermen what the best bait is, you’re likely to get twenty-five different answers. Twenty of the twenty-five answers will likely have one thing in common, the term “live” will  be the first word. Pinfish Seems to be a go-to bait because of its availability throughout the region and the fact that it can be caught in advance and kept for days in a good livewell. Other good 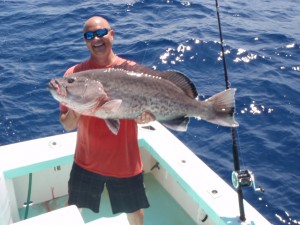 baits include sardines, scads, cigar minnows, spots, croakers, grunts, threadfins and pogies or menhaden. Some of which can be caught in advance, some will have to be caught via the bait stop on the way out. Either way, bring plenty of frisky live bait and make sure they are on the large side. There are two reasons to fish with the larger baits. !. The biggest reason is the over-population of the “overfished” (per SAFMC [later converstion..]) American red snapper. On much of Florida’s East Coast, the red snapper out-number the grouper by 100 or even 200 to 1. They are big (many between 12-25 lbs), extremely aggressive and will eat you out of bait and boat. Some spots, they will swim right to the transom and wait like a Labrador Retriever for you to throw something in the water. 2. The second reason for the larger bait is that the grouper is inherently lazy and likes to eat the biggest, easiest meal it can find. A gag grouper will routinely eat a bait that is roughly 10% of it’s body weight, which leads to the other five answers that pertain to dead bait. Sometimes, the grouper will fall victim to whole, dead fish like Spanish sardines or cigar minnows. The problem with these is the above mentioned snapper and the thousands of seabass, grunts and triggerfish that will peck the dead stuff off the hook. Sometimes a nice chunk of bonito or mackerel will also do the trick.

The next step is presenting the bait to the fish. If the water is shallow enough and there is not too much current, I prefer to anchor. In this case, a trickle of current (< 1 knot) is ideal. This way, the boat can be positioned up-current of the structure. Ideally, you can entice the grouper to feed away from the structure, so that you can stop him from getting back in the hole after he is hooked. If the fish gets back home, your buddies will be yelling “GONE” or “FAIL” and you will have the embarrassing task of tying on a new rig. Don’t worry, you’re only the “Goat” until the next guy breaks one off and then you can yell at him. It’s a vicious cycle until somebody catches one and claims the belt.. If there’s too much current to anchor, you will be relegated to drift fishing. In this case, you will be trying to drop ahead of the spot to land the baits in the strike zone. If one person drives the boat, it is possible to stem the tide by clutching the boat in and out of gear, thus staying in the strike zone much longer than if the boat is in a dead drift. For the most part, you will need to hook the baits through the nose area, unless there is little or no current. in a zero current, I like to hook the bait in the area just above the anal fin. It takes a little longer to reach the bottom, but can be a deadly tactic.

I have to sign off now to go fill up some bait pens for the upcoming weekend..

If BD has me back, maybe I could go over some of the specifics, tell a story or bash the National Marine Fisheries Service, we’ll see..